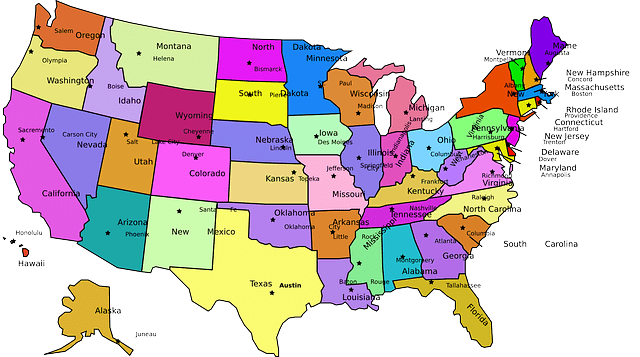 USA Map  with states and capitals.

As you can see in the USA Map  with states and capitals, the United States is a country with 50 states and occupy a large part of North America.

In the USA Map we can see that Alaska is in the northwest and Hawaii in the Pacific.

It can also be observed in this Map of the United States with states and capitals that the main cities of the Atlantic coast are New York, a global financial and cultural center, and the capital, Washington, DC. The metropolis of Chicago in the Midwest is known for its influential architecture. Hollywood, on the west coast, based in Los Angeles, is a famous place in the film industry.

In this USA coloring map , which is on your right, you can print, mark, cut and color the states of the United States.

To learn the map of the United States you have this alternative that allows you to print it in PDF format. You can simply click on the image and it will take you

to the PDF file.

Learn and know the map of NYC with its tourist attractions, we also have an Europe Countries Map, which is very interesting and educational,

Map of United States without names to learn all the States. Download now the image of the United States State Map Color Without Name. Just click on the image on the right and you will see a PDF file that you can print.

50 States and Capitals of the United States of America

0
User Rating: Be the first one !
0
Map
webmaster
Share !
Previous: The 10 best places to visit in Guadalajara
Next: The Greek Islands; Mykonos, Santorini