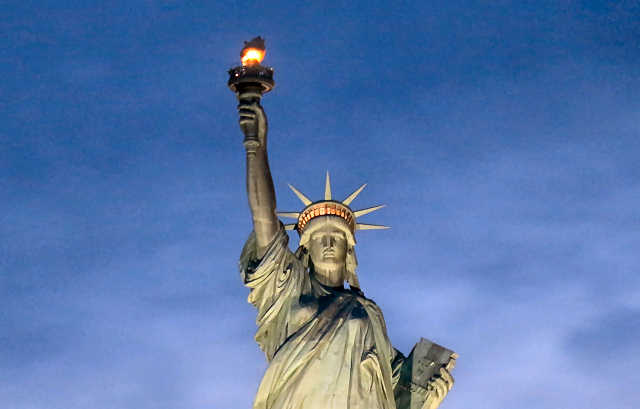 Know the best Cities to Visit in the USA. The United States has many cities and natural attractions to visit. New York, Boston, Miami, best Places to Visit

Best Places to Visit in the USA

The Statue of Liberty , the White House , the world of Disney,

Hollywood, Broadway and Wall Street – these images come to mind when thinking of the United States .

The third largest country in the world which has many incredible cities and a lot of natural attractions that would be impossible to list them all. There are many fabulous cities in the United States that are definitely worth knowing.

Have you ever been to Bar Harbor Maine or Savannah Georgia or Portland Oregon?

If the answer is No, then you should regret visiting them. But if we have to choose between the ten best cities to be visited in the United States, we have to go for the traditional ones, after all, it can be said that one has not been to the United States.

If you do not know cultural icons such as the Statue of Liberty and the Golden Gate Bridge, or natural elements such as the Grand Canyon and Lake Tahoe. So, here we present the 10 cities that cities in the United States should visit.

Best Cities to Visit in the USA

Most agree that New York is one of the most fascinating cities not only in the United States but throughout the world. Therefore, it must be first on the list that must

be visited in the United States .

What makes it so fascinating? First of all, of course, its architecture, the skyscrapers of Manhattan are absolutely incredible. Second, his multicultural personality, New York is a true mix of rasas and cultures.

And finally, nowhere else in the world, are the best restaurants , the best hotels , museums and theaters all gathered in a small area of ​​only 23 23 square kilometers, which is how small Manhattan is.And whatever your passion in culture, entertainment or food, you will find it here.

Do not forget that, in addition to Manhattan, there are four other municipalities in New York with a lot of things to do and see.

Well, if New York has everything, then perhaps the obligatory visit in this list of cities in the United States should only have one city – New York ?

No, it’s not really true since there is so much more to know in this amazing country besides New York.

2. Best Cities to Visit in the USA Boston

While New York is defined by its horizon, Boston is distinguished by its well-known neighborhoods. Every neighborhood in Boston has its own personality and distinct appeal.

From the oldest to the most modern, from Back Bay to Beacon Hill to the colorful Chinatown of the historic North End .

Stay and enjoy your holidays in the best hotels in Boston . A walk through the old city is like reading a textbook about the history of the United States.

Each stop represents a chapter in American history. Its cultural and commercial center of New England , Boston absorbs all the best of the region, including the best meals like the narrow lime of Maine and New England, clam chowder.

Try to eat them when you visit Boston, because they are the best you can find in the whole country.

3. Best Cities to Visit in the USA Washington, DC

The city is particularly glorious in spring, when its abundant gardens and parks are flowered by the season.

When you visit the White House, take the tour of the White House and see the Jacqueline Kennedy garden, and the Rose Garden – they are absolutely splendid.

The first thing you should do is locate the most convenient hotel in Washington DC , which gives you a good location.

Take a walk to the top of the Washington Monument to see the spectacular views of the city and its surroundings. Walk through the cobbled streets of Georgetown, the most beautiful neighborhood of the city with restaurants, bars, nightclubs and shops .Relax in the gardens of Dumbarton Oaks , one of the most beautiful places in the city.

4. Best Cities to Visit in the USA, Miami

Miami , known as the Riviera of the United States for its 10 kilometers of wide white sand beaches, beautiful Art Deco architecture, fashionable hotels , elegant restaurants and lots of fun – this is Miami.

In addition, a great cultural heritage of Latin America, in some neighborhoods of Miami you can easily forget that you are in the United States.

If you have not had the chance to know Cuba, a short trip to Little Havana in Miami could give you a glimpse of the jewel of the Caribbean: the aroma of coffee and Cuban cigars, Cuban music, art and crafts, typical restaurants and colorful facades.

But, if you are really wanting an adventure trip, you should rent a car and go to Key West for a couple of days. Not only because Key West is a paradise, but also because the road from Miami to Key West is really impressive.

5. Best Cities to Visit in the USA, Las Vegas

Las Vegas, a cosmopolitan city with luxury hotels and five-star hotels , prominent and acclaimed restaurants, exclusive spas and world-class golf courses, you have to party in Las Vegas at least once in your life.

The proximity of Las Vegas to the unique treasures of nature, such as Red Rock and the Grand Canyon, Colorado River and Death Valley make it an excellent destination.

In addition to the tourist attractions of Vegas, for nature lovers. It is worth making a road trip to Death Valley National Park , just a couple of hours away from Las Vegas , and enjoy this extraordinary park.

Or drive a little further to the Grand Canyon , Or visit Lake Mead , a large artificial lake, and one of the largest in the world

6. Best Cities to Visit in the USA, Orlando

The most complete collection of Tiffany art is at Charles Hosmer Morse Museum in Orlando. Before your trip to Orlando, look at the great Orlando hotel rates .

7. Best Cities to Visit in the USA, San Diego

The jewel of Southern California, they have it all. For beach lovers, a visit to La Jolla is mandatory, the most beautiful beach on the west coast as it offers surfing, snorkeling and excellent sunbathing.

In San Diego, the part known as Ciudad Vieja, is the historic heart of the city, the “cradle” of California. San Diego was the first permanent Spanish settlement in California.

The Spanish and Mexican heritage of the city is celebrated throughout the Old City, including the best Mexican food and margarita cocktails.

8. Best Cities to Visit in the USA, Los Angeles

Hollywood and Beverly Hills, Malibu and Sunset Boulevard – these places have to be a must-see on the travel list to the United States, they are all in Los Angeles .

Who would not want to take a walk down Sunset Boulevard in a convertible or watch the sunset on Malibu Beach with a glass of California wine? If you’ve never done it, you should do it!

In addition to the famous attractions and intense nightlife of Los Angeles , the city has an ideal environment to explore. You can stay at any of these fabulous Los Angeles hotels . Just take a road trip to Santa Barbara and you will witness an impressive beauty of Southern California.

9. Best Cities to Visit in the USA, Seattle.

If you think that Seattle is just bad weather and rain, you are absolutely wrong.

Called Emerald City is the green gem , with a large number of leaf trees permanently everywhere, and the breathtaking views of the Cascade Mountains to the east and the Olympic Mountains to the west. Mt. Rainier looks down on Seattle from its majestic height.

Staying in a hotel in Seattle and then driving through Seattle on a clear day can be compared to floating in a cloud in an emerald sky.

Go to the top of the Space Needle tower and enjoy a panoramic view of the city, a lunch on the terrace of a cafe on Pike Market Street and embrace the best of what Seattle can offer – splendid views and the freshest seafood and big.

10. Best Cities to Visit in the USA, San Francisco

The famous city with steep hills and trams, breathtaking views, the iconic Golden Gate Bridge, the Fisherman’s Festive Wharf and the Chinatown, numerous gardens and delicious food make San Francisco very unique and, from my point of view , the most beautiful city in America.

Find out where to stay in San Francisco hotels with the best rates. When in San Francisco, a trip to Napa Valley for a glass of wine or two while enjoying breathtaking scenery.

Or go to Lake Tahoe, to see “the jewel of the Sierra”, one of the most beautiful lakes in the country.

webmaster
Share !
Previous: Tourism in Germany – A guide to Germany
Next: Holidays in Portugal