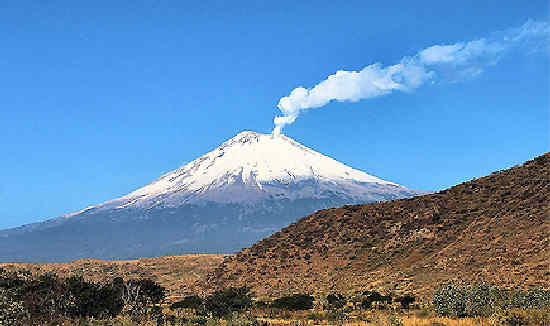 This is a list of active and extinct volcanoes in Mexico.

Mexico is a country with a great variety of volcanoes, which can be old or young, and large or small.

Mexico has a good number of volcanoes, of which the highest peak is the Pico de Orizaba (5,760 m) , often referred to as Citlaltépetl (“morning mountain” in the Nahuatl language) and considered the highest point in North America. Most of Mexico’s Volcanoes are located not far from Mexico City.

The Mexican territory is crossed by a system of volcanoes that mean a risk and a benefit for the country. Mexico is geographically located in a very active area of ​​the earth’s crust, acting as a bridge between the continental plates of North and South America, which causes a great amount of seismic activity.

There are more than 20 more or less active volcanoes throughout the territory and some of them exceed 5,000 meters in height

Of the Volcanoes in Mexico, the most representative volcano is Popocatépetl , in the center of the country, Although in Mexico there are a considerable number of volcanoes, most are inactive. In Mexico there are more than three thousand volcanoes, of which 15 are considered active volcanoes . Citlaltépetl, Popocatepetl , Fire of Colima, Tacaná, Ceboruco, The Three Virgins.

Popocatépetl (in Nahuatl Popoca, “smoking” and tepetl, “mountain”, smoking mountain) is an active volcano in Mexico , located in the state of Puebla , 70 km southeast of Mexico City, and only 45 km to the west of the city of Puebla.

It is the second highest point in Mexico after Orizaba Peak , with recent activity documented as the eruption of 1947 and the emission of gases and ashes of December 1994. The last time the Popocatepetl erupted was in December 2007.

The Iztaccihuatl (from Nahuatl Itzac? White? And? Woman? Cíhuatl) is the third highest mountain in Mexico after the Peak of Orizaba . This mountain has four peaks of which one reaches 5,286 m above sea level.

The 4 peaks represent the head, chest, knees and feet of a sleeping woman. These formations, despite being located 70 km from Mexico City, can be seen on clear days from the same city.

The Pico de Orizaba or Citlaltépet l (from Nahuatl Citlalli? Star? And tepetl? Mountain?) Is a volcanic peak in central Mexico. It is located near the eastern end of the Neo-Volcanic mountain range, on the border between the states of Veracruz and Puebla .

The volcano is inactive, but not extinct, since its last eruption occurred in 1687, which at geological ages means that it was relatively recently.

The Nevado de Toluca volcano (often called Xinantécatles) is generally cited as the fourth highest peak in Mexico, although, according to some assessments, the Sierra Negra is slightly higher.

It is one of the few volcanoes that still allows a partial ascent by car, so you can leave early in the morning from Mexico City to spend the day in the place and return at night.

To the north of the city of Colima (western Mexico), you can see how the Nevado de Colima volcano rises . The eruptive activity of this volcano is usually manifested by the formation of a lava dome in the crater of the summit. The excessive pressure of gases causes the dome to explode and generate volcanic activity, although since 1913 there has been no major eruption.

The Paricutín volcano is located in the Mexican state of Michoacán, near the town of  Nuevo San Juan Parangaricutiro and 20 km from the city of Uruapan. It reaches its maximum at an altitude of 2,773 m. , although despite its low height compared to other volcanoes in the country, it is one of the most damaged.

Since the devastation of the village of San Juan with the eruption of February 23, 1943, the volcano was active for 10 years in a row, so that the inhabitants of the nearby areas were forced to leave the site.

There are many travel agencies and adventure tourism companies that offer vacation packages that include visits to one or several volcanoes, approaching the craters, guided hiking in the surroundings and overnight stays in tents or rural accommodation.

Popocatépetl and the Iztaccíhuatl – Mexico

The 10 best places to visit in Guadalajara