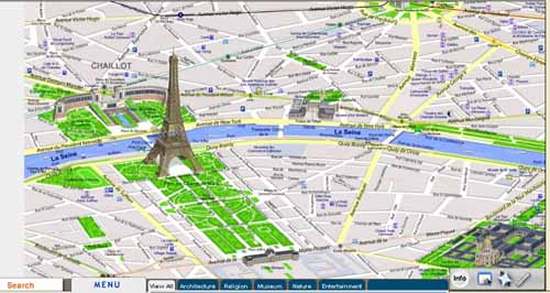 Map of Paris France with tourist attractions, explore the city with our interactive Paris tourist map.

Paris is one of the most popular travel destinations in the world. A city known for its stunning architecture, delectable cuisine and the latest fashion.

Map of Paris france with all the museums, monuments and tourist sites of Paris. Guide to travel to Paris with the Paris Tourist Map . With the map of Paris , find hotels and tourist information to prepare your trip.

With the Paris Tourist Map with tourist attractions You can locate yourself in Paris, and find an address or a hotel.

Paris map with all the city’s monuments, museums and attractions

Explore the city with our Paris tourist map. – detailed map of Paris with names of the streets and avenues.

The map of Paris is a very useful resource for the addresses of the hotels in Paris and tourist sites to visit.

Paris Tourist Map with essential attractions of the city of Paris , from symbols such as the Arc de Triomphe and the Eiffel Tower to the Louvre Museum and the Champs Elysees.

The most visited tourist attraction in Paris, the Eiffel Tower, the tower consists of 18,000 sturdy iron sections (weighing over 10,000 tons) held together by 2.5 million rivets.

Visitors can take an elevator or walk up the 360 steps to arrive at the first level. It’s best to purchase tickets in advance especially if visiting during high season.

The Louvre is the most important of Paris’ top museums. The Louvre Museum possesses more than 30,000 artworks (many considered masterpieces)

It is impossible to see it all in one visit, but people can focus on a particular gallery, such as Italian Renaissance art, classical sculpture,  or 17th-century French paintings.

The most famous piece is the Mona Lisa or La Gioconda, painted by Leonardo da Vinci in 1503-1505.

To get the most out of a visit to the Louvre, tourists can take a guided tour.

The Notre-Dame de Paris cathedral, jewel of Gothic architecture, is one of the most visited monument in France. Located in the historic center of Paris, at the tip of l’île de la Cité, its construction began in the Middle Ages.

After a serious fire on April 15, 2019, the Notre Dame Cathedral, its treasure and its towers are closed until further notice. The esplanade has been accessible again since May 31, 2020.

Nicknamed “the most beautiful avenue in the world”, the Avenue des Champs-Elysées is an essential stop on a visit to the capital.

The avenue des Champs-Elysées is also marked by the presence of the main museums: Grand and Petit Palais, the Palais de la Découverte, the Louis Vuitton cultural center.

The Orsay Museum in Paris was originally built not as a museum but as a train station. The Gare d’Orsay station was opened for the 1900 World’s Fair and served the Paris-Orleans route.

A large continuous glass roof provided protection for travelers upon arrival. Due to its impressive interior, the station could only accommodate electric trains, but not steam locomotives.

Today you can see the works of the great masters of impressionism at the Orsay Museum in Paris. These include Monet, Manet, and Renoir.

The Musée d’Orsay de Paris is located in the center, on the opposite bank of the Seine and the Louvre Museum, and is easily accessible by public transport

The Palais Garnier is the old opera house. It is one of the most important places for visitors to Paris. It was commissioned by Emperor Napoleon III. Built in 1875 as a magnificent representative building.

The building, named after its architect Charles Garnier, is pompous in a neo-baroque style.

Ballet and dance form the main focus of the Palais Garnier. Here is the headquarters of the legendary Ballet de l’Opéra de Paris.

In addition to classical ballet, the Palais Garnier also has the modern dance theater at home. The great choreographers of our time are represented here.

It is distinguished by the Louxor obelisk (dating from 3,300 years before Christ and erected in October 1836), by the prestigious hotels that border it and by the two monumental fountains ((Fontaine des Mers and Fontaine des Fleuves).

It is between 1836 and 1846 that the architect Jacques-Ignace Hittorf designed the square to make it the one we know today.

Map of Paris with tourist attractions.

Map of Paris with tourist attractions , with all the monuments, museums and points of interest of the city. Plan your trip with our interactive Paris map.

Know all the places to travel the world

Tourist map of Paris : All the tourist places of Paris

Map of Paris , to explore the avenues, streets, neighborhoods and points of interest of the capital of France.

Map of Paris with tourist attractions