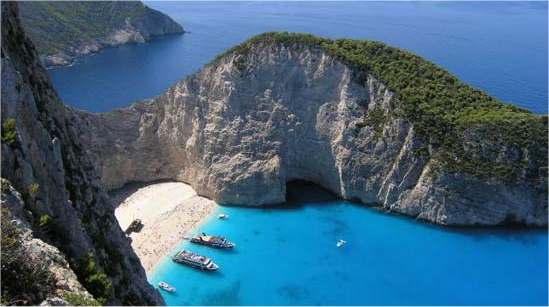 Mykonos is one of the beautiful Greek islands located in the popular Cyclades Custer , which makes a ferry trip of approximately 4 hours to get from Athens . It is famous for its nightlife , but especially for its gay nightlife. You can find great deals if you go to the beginning of the season (during spring break , essentially) and after a stay in a luxury hotel with pool bar and breakfast buffet where you can repeat a delicious traditional Greek yogurt and honey , all for less than 30 euros per night.

Being an island, the main attraction in Mykonos is, of course, the beaches. It is suggested to “follow the coast” to reach other beaches , which can become a risky adventure of climbing through a maze of rocks and weeds. Finally you arrive at the destination: paradise (which is La Playa). At this time of year . It is refreshing to see the island in a state of calm and be able to fully enjoy the meanders of the idyllic blue and white buildings and small cobblestone streets. At night, after devouring a perfect Greek salad (which, despite what your favorite Greek restaurant claims, consists of cucumbers, tomatoes, onions, olives and a large feta square-hence, no lettuce) and A piece of sweet baklava puff pastry, we ventured to experience the nightlife in the center of the city. Although many bars had not opened for the season, however, we found a fun bar.

It would not be presumptuous to claim that Santorini is the most beautiful place you will ever see. This island, another 4-hour ferry away from Mykonos , sits on a mountain 350 meters above sea level and is one of the most famous Greek islands (and also most often photographed). Despite what you may think, once you have seen a Greek island , you have not seen them all.

Santorini is intimidating on its large scale and it certainly could not be limited to “follow the coast” of the beach-hop like in Mykonos . I would probably have to have a horse. Be careful of where you decide to stay on the island, you can stay in a hotel outside Fira , capital of the island, and pay only 9 euros each for a room that fits 6 people.

The highlight of Santorini is Oia (which can be reached by a bus leaving from Fira ), which has been praised as one of the first places in the world to watch the sunset. We do not exaggerate, but Oia feels like the sky, or at least a blue and white cloud floating in the sky. I ended up spending most of the time wandering its winding streets with a camera. Santorini does not have an outstanding nightlife , you can watch the spectacular sunsets from a table in a restaurant or stay at the hotel, drinking a Mythos beer, while watching Greek television . You can spend a day visiting and climbing a volcano and visiting “the hot springs”.