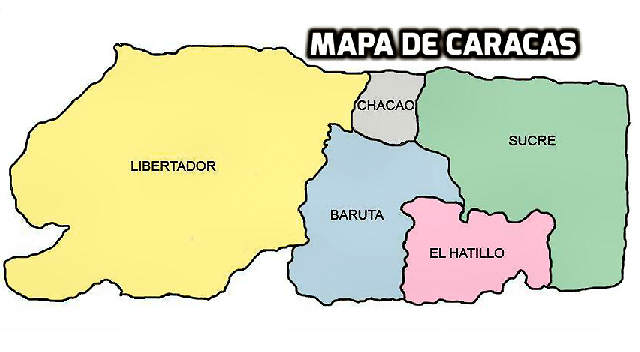 Tourist map of Caracas, Map of the Center of Caracas.

To search for addresses in Caracas on the map click here and enter the address in Caracas you want to see. To see Map of restaurants in Caracas. or locate a hotel in Caracas.

Caracas is the capital of the Bolivarian Republic of Venezuela, center of the central public administration, Venezuela’s most important financial, commercial and cultural center.

It is located in the center-north of the country, about 15 km from the Caribbean Sea and is located within a valley in the Cordillera de la Costa system at an average altitude of 900 meters above sea level

Caracas together with the adjacent territory is assigned to the district of the federal capital. The success and popularity of the tours to Caracas is provided, in the first place, with a sufficiently developed infrastructure that can satisfy all the needs and demands of recreation.

In the city there are many restaurants and cafes that offer tasting the national cuisine of the country. For the conservatives, Caracas also offers restaurants with European cuisine.

At night, a stormy night life begins in the city, clubs and discos open their doors to visitors, where renowned DJs and celebrities act.

For those who prefer a more relaxing vacation in Caracas, at night you can stroll through the city, admiring the lights.

Caracas a complex that offers tourists many opportunities . People come with different requests and expectations. Young people are opting for more and more visits to Caracas , since it is possible here to combine relaxation by the sea and active distinction, including on the water, with a great opportunity to get to know the culture of Venezuela, after examining all the most famous places of your capital.

For those who love a quiet and comfortable stay, you can stay in a nice hotel in the city , located in the center, very close to all the places of interest.

At the same time, Caracas is a beautiful tourist city that drowns in the most beautiful beauty of its surrounding nature. Caracas Venezuela

Most of the attractions of Caracas are concentrated in the old part of the city, El Centro. A large statue of the liberator of Venezuela rises in the central plaza, named after his name.

The Plaza de Bolívar is rich in historical monuments: there is the Caracas Museum, the Caracas Cathedral, the Sacred Museum of Caracas with an extensive collection of religious art objects and Casa Amarilla.

Right in the block of the square is Casa de Natal-de-Simón Bolívar , a large colonial house, also home to the museum “El Libertador”.

Very close to the city is the National Park of Ávila , which can be reached by climbing to the top of the mountain along hiking trails or in a comfortable cable car.

Map of Caracas with streets and avenues, Distrito Capital Venezuela route of roads and how to get to Caracas , maps of google map of Caracas

Address search on the Map of Caracas. Caracas has one of the largest motorway networks in Venezuela, almost all built in the second half of the twentieth century in the governments of Marcos Pérez Jiménez, Rómulo Betancourt, Raúl Leoni and Rafael Caldera.

See in detail directions of streets and avenues on the map of Caracas. Map of current Caracas, with its streets, avenues, corners, will help you find the address you are looking for.

From the history of the city it is known that the man who founded the settlement here in 1567 on the day of Santiago was the Spanish conquistador Diego de Lozada.

The name of the city comes from an ancient Indian settlement, in the territory of which it was built, after it was burned and destroyed by the Spanish conquerors.

During the XVI-XVII centuries, Caracas was victim repeatedly of the attack of the sea thieves. Until 1777, Caracas had the status of the residence of the Spanish governor, and then it became the capital of Venezuela, having the position of captain general.

In 1818 the independence of Venezuela was proclaimed, led by Karaks, the National Congress was established.

Map of Caracas Complete with Streets and Avenues.